How to Optimize For Featured Snippets and Get to Position Zero

[This article was updated on April 27, 2020 to reflect the latest information regarding featured snippets, including Google’s January FS Update.]

Featured snippets… You can love ‘em, you can hate ‘em, but you can’t get away from ‘em. In this article, we’ll dive deep into the world of featured snippets, figure out exactly what they are, and why they’ve become so important for SEOs. I’ll also give you a complete walkthrough on how you can optimize your webpages for featured snippets.

Who Should Read This Article?

What Is a Featured Snippet?

A featured snippet is a search answer shown at the top of a results page. It is Google’s attempt to answer your query right then and there. A featured snippet is intended to address an informational or situational need, which means that it appears on top of SERPs for answer-seeking queries.

Before January 22, 2020, a featured snippet looked something like this:

However, since January 22, 2020, that is no longer the case. If your page is appearing in the featured snippet, it won’t appear a second time in the SERP. Featured snippets now count as one of the ten web page listings shown by Google.

The most common form of featured snippets. Google will grab a paragraph from a page that best answers the search query and present it as a snippet. 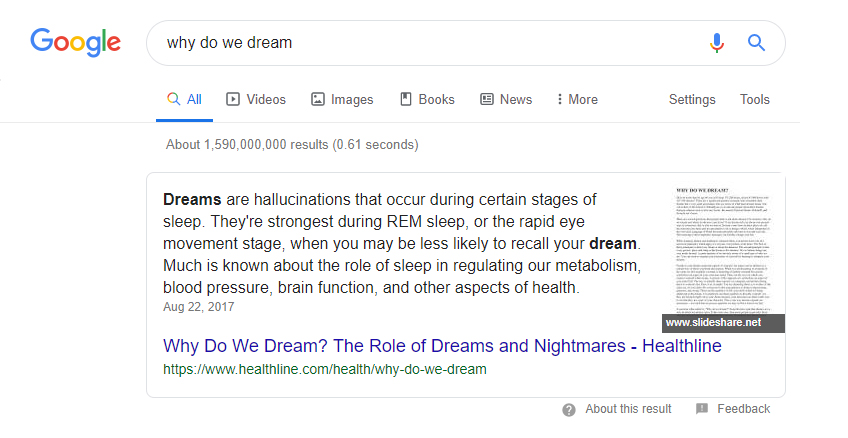 These are lists that appear in numbered or bullet forms. They are more common for rankings, processes, step-by-step instructions and other form of list queries. 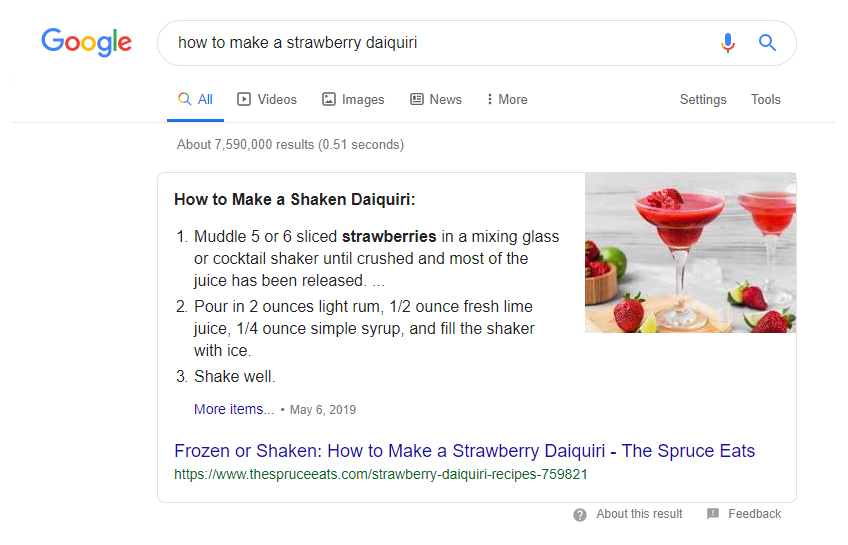 Table featured snippets appear less often, but when they do it’s usually for queries related to prices, rates, historical comparisons and other numerical data. 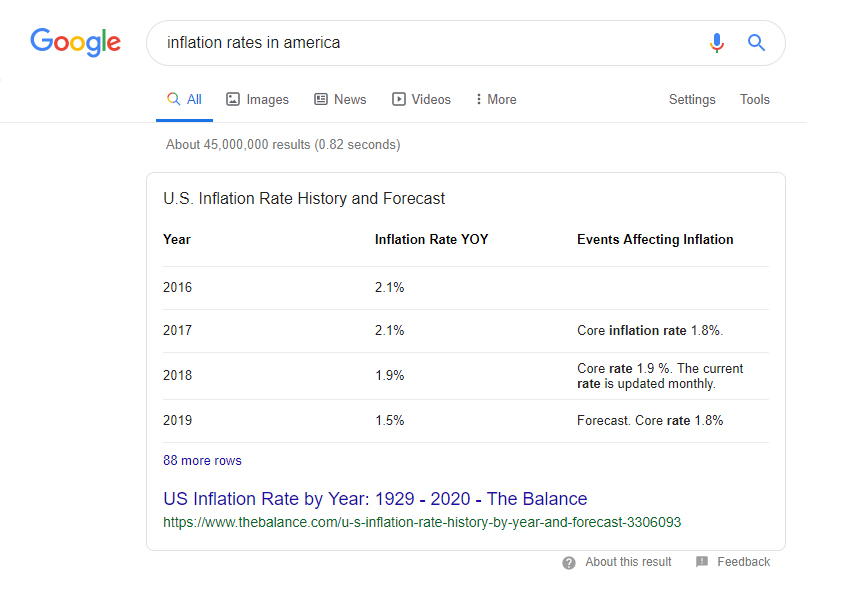 Video featured snippets appear for “How to …” questions that require a step by step process. The videos may not always start from the beginning, as Google’s algorithms might highlight a portion of the video it thinks best answers your query. 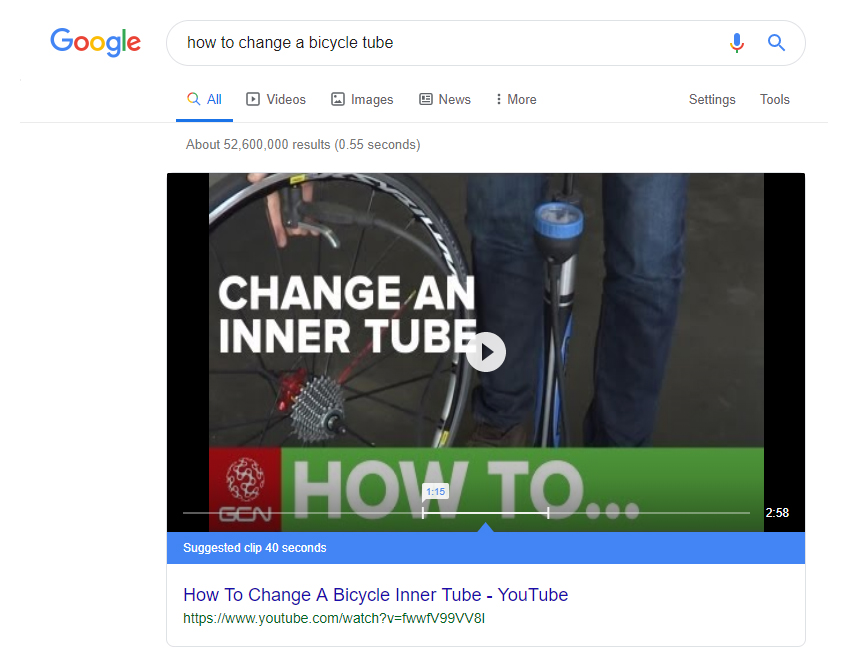 Google also presents search answers in other formats, but they are not featured snippets:

A list of similar queries, with an answer appearing in the drop-down. Fun fact: each answer is the featured snippet for that query. 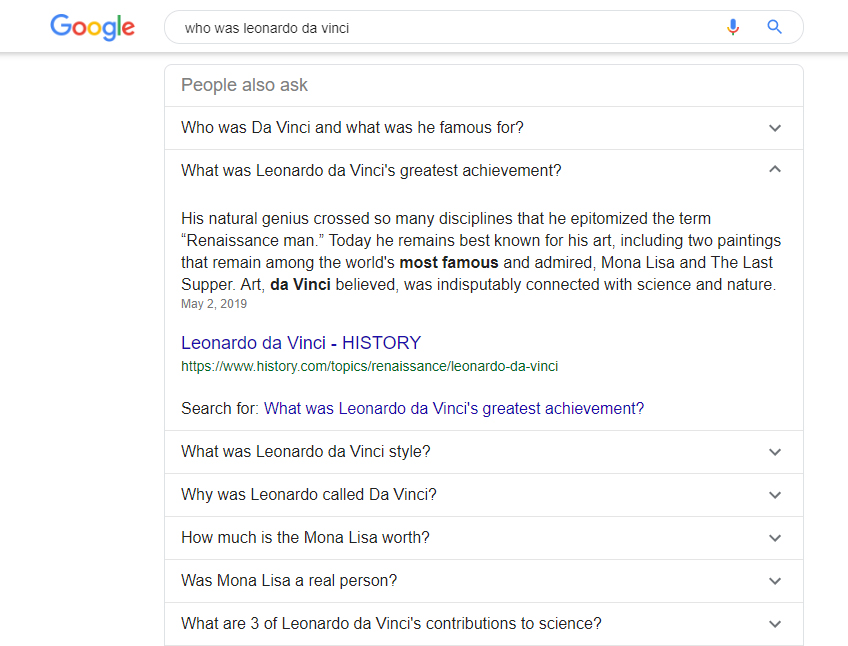 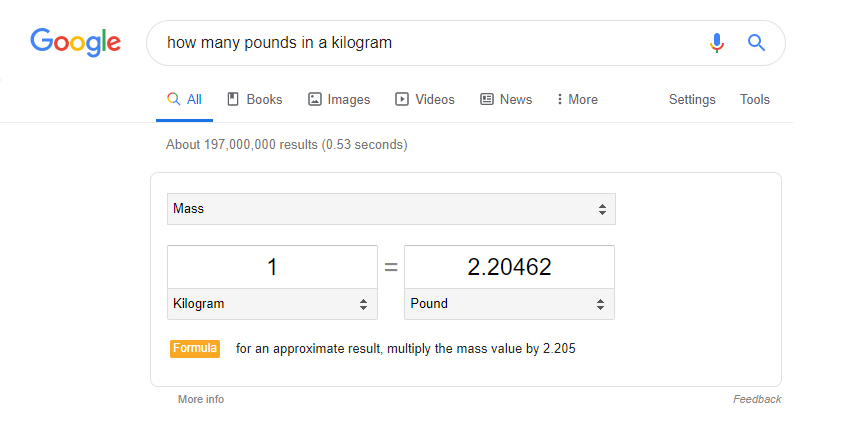 Displays several results in the form of cards, each of which is related to the original search query. 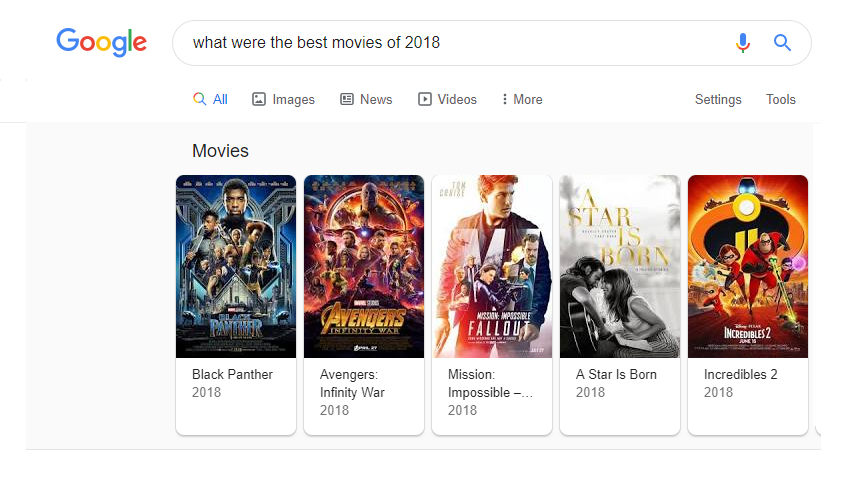 Appears as a panel on the right hand side of Page 1 and provides further information for a specific entity mentioned in the search query. Knowledge cards may include information from Google Maps, Google reviews, Wikipedia and more. 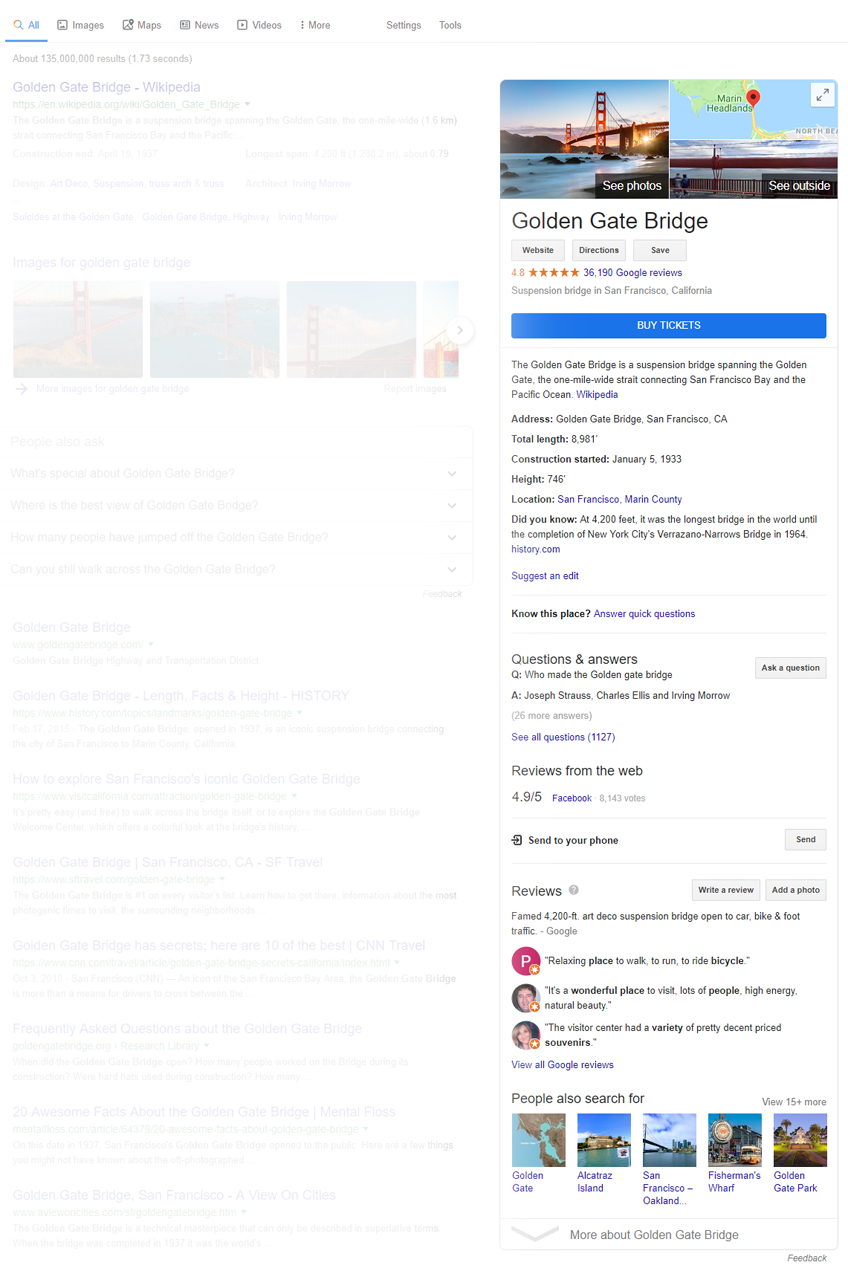 I asked Bill Slawski of Go Fish Digital if there could be an overlap between featured snippets and knowledge panels, and this is what he had to say.

Google will likely augment search results based on recognizing an entity that is included in a query, which can mean both knowledge panels and featured snippets (and people also ask & related entities.) https://t.co/ZtwI1WPrzj https://t.co/r7Zu2ZPeM9

Why are Featured Snippets Important?

Featured snippets are appearing more and more frequently in search results. If you have the chance to appear on a featured snippet, you definitely should avail the opportunity. Failure to do so means you’re losing out on traffic, authority and maybe even customers.

Here are some reasons why featured snippets are becoming more common in search results and why you need to up your game:

1. You Get More Traffic

Yep, that’s right. Previously, if you were ranking on Position Zero, you’d be getting more traffic than the first organic search result. Studies by Ahrefs and Mangools showed that Position 0 pages always outperformed Position 1 pages.

And that holds true even after the January 2020 update. Cyrus Shepard of Moz ran a study where they opted out of featured snippets (the #1 position) for some queries for which they were ranking.

The results? Their ranking dropped to #2 or #3 AND they saw an estimated 12% drop in traffic for all affected pages after losing featured snippets (95% confidence level).

I talked to Cyrus and he said they didn’t track for differences between complete vs. “incomplete” FS. We both agreed that there’d likely be a shift in CTR between these types of featured snippets. I believe that if they had tracked for those differences, their study would have shown some really interesting results, as I suspect “incomplete” FS perform better than their “complete” counterparts.

It's a good question, though not anything we tracked. I agree, there would likely be a CTR shift for these queries

So the verdict is pretty clear: if you’re serious about getting high quality traffic and beat the competition, you need to beat them in the rankings.

Voice searches are the future. Camscore estimates that by the end of 2020, 50% of searches will be voice based, thanks to improvements in mobile AI to better understand our speech patterns (think OK Google or Hey Siri), while sales for voice-based smart speakers like Amazon Echo & Alexa, Google Home and Apple HomePod show no signs of slowing down.

As voice searches tend to be longer, more natural sounding and almost always in the form of a question, the chances of a featured snippet appearing as an answer is much higher.

Ask yourself, how many times do you even bother going to Page 2 of Google?

Users trust Google to provide them with the most relevant results and consider the top results as far more authoritative and relevant than those lower down on Page 1 or **shudders** on Page 2 or 3.

If you can provide useful content to people the first time, you increase the likelihood of them coming to you a second time. By ranking for a featured snippet, not only are you attracting more views and traffic to your content, you’re also building authority for your brand.

How to Optimize Your Blog Post For Featured Snippets

1. Are You Already Ranking On Page 1?

If you’ve been creating quality content for some time and know how to optimize it, chances are you’re ranking on Page 1 of Google. And if your content is really good, you just might be occupying a place in Positions 2 to 5.

Because you’ve already done the difficult work of reaching the first page, you are in prime position to get a featured snippet. In fact, the higher you’re already ranking on page one (between Positions 2 and 5), the better your chances.

By simply optimizing the code for your page and improving the structure of your content, you can easily jump to a featured snippet in a matter of weeks. Hubspot did it to capture multiple new FS spots where they had previously been ranking in Positions 2 to 5 (but not for a FS).

Keep reading to figure out how optimize your code and get featured.

2. Clean Up Your Code

How do you clean up your code?

Google see H1 as the main title of your content and H2 as the heading for individual sections within the page. If you want to appear in paragraph featured snippets, then you should use the following format.

Your H2 should ideally include keywords from the search query. Since voice based search queries are becoming more common and are structured as complete questions, you can also frame your H2 as a question and the paragraph snippet as the answer for your readers.

Did I tell you Google loves list? If you want to score a featured snippet for search queries about processes, lists, orders, and step-by-step guides, you need to structure your content for ordered lists.

Google will pull H2s as the snippet title and H3s as the list items in the snippet. Bullet points, or unordered lists, are useful in cases where the order is not important.

Use these techniques every time you are aiming to capture a featured snippet. Not only would the content look better to readers, but it would also become more optimized for search crawlers.

If you’re looking for new topics to write about and get featured, you need to start off with an effective game plan. Your first step should be keyword research as it gives you a lay of the land and really sets you up for success.

Snippet rich search queries are often framed as questions: who, why, when, what, how. With proper research, not only do you learn what people are searching for, but you also get to see what’s currently ranking on top.

All you have to do is figure out what exactly what type of content your audience wants and answer their queries.

6. Here’s Where To Find Snippet Opportunities

The best places to find the hottest search items include: 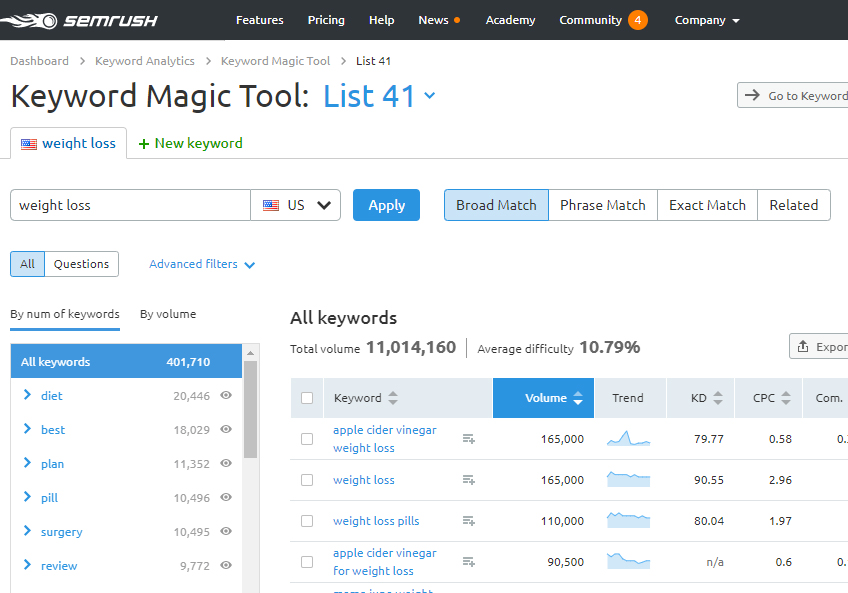 With SEMRush, you get to see the different combination of search queries for a particular keyword ranked according to the total number of monthly searches. This helps you identify the most popular keywords you can try to rank for and give the competition a run for their money.

SEMRush also helps you track featured snippets you’ve already won and highlights other keyword opportunities where you can earn snippets.

A free tool that creates multiple offshoots of a keyword, Answer The Public is a great place to start brainstorming for keyword ideas. Simply enter a keyword, get dozens of query options, plug them in to SEMRush or any other tool you’re using, and find out what’s the best search query for you to rank for. 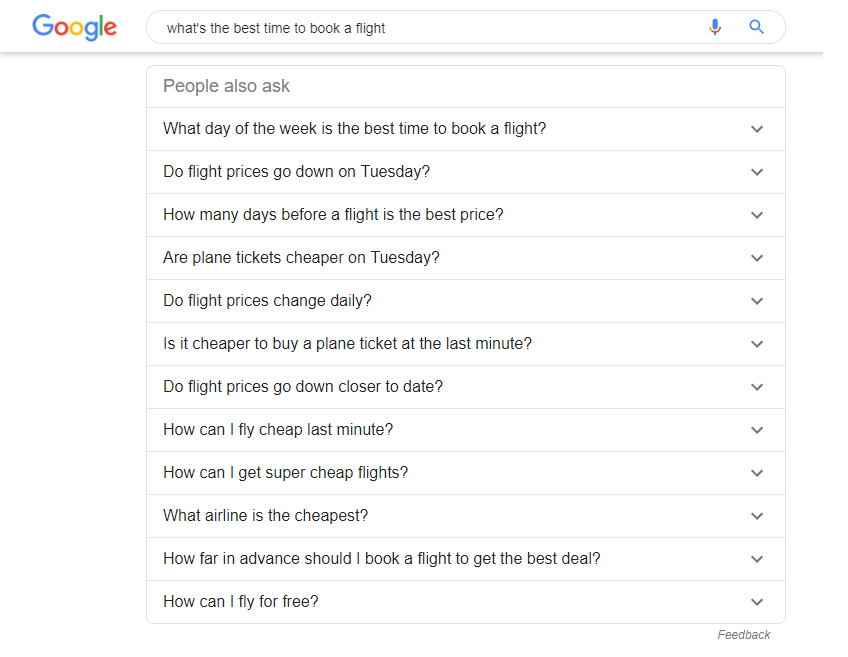 Google can also be a great place to find out what information the public’s after. Simply check out the “People Also Ask” section in a search result to see what other related questions people have been asking and decide whether you want to try ranking for it or not.

Apart from People Also Ask, Google’s search bar itself gives you a fair bit of an idea of what people are searching about. You might find it mildly annoying (I do, sometimes), but Google’s attempt to finish your sentence just might open up a whole new ranking opportunity for your brand.

At the end of the day, nothing beats quality content. You can try optimizing a poorly written article all you want, but all you’re going to get is a high bounce rate and low rankings.

Create content that people actually want to read, provide value so that your content is worth their time, and write it so well that it keeps your readers hooked till the end.

One technique you can use is the Inverted Pyramid. Commonly used in journalism, this technique structures your content by giving the conclusion (the most awaited part) first, and then delivers details which support that conclusion. If written well, your “conclusion” could be the paragraph snippet you’ve always wanted to get featured!

8. Take Care Of Your Word Count

According to SEMrush, most featured snippets have a length of 40-50 words, while Hubspot gives the cutoff point of up to 58 words.

Check out this snippet about U.S. President Woodrow Wilson that’s really pushing the limits at 51 words.

A Quick Recap on How to Optimize for Featured Snippets 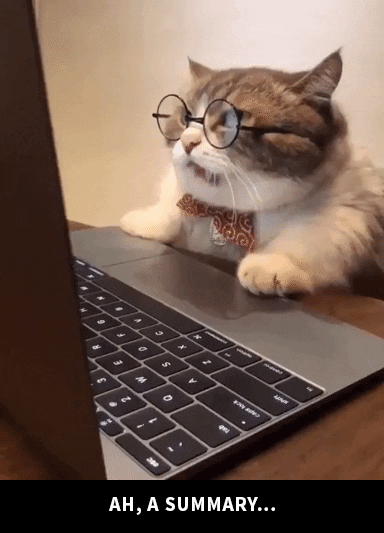 Getting a featured snippet is not impossible. Once you start using these tips, you’ll see the difference yourself. Who knows, this time it might be you who’s ranking on top.

What type of Link Building Services Should You Use?