For the audience, Pop Culture and Digital Marketing is like a box of chocolates. They never know what they’re gonna get. Maybe that is one of the reasons why it has been so dynamic too.

Nonetheless, relevant brands reign supreme in the minds of customers, and even the general audience. Be it via CSR(Corporate Social Responsibility) campaigns or plain engagements, the social pages of every market-leading brand are sure to be buzzing with vibrant content and awe-inducing videos.

Brands worth their salt always invest in ideas. They make sure people don’t forget about them.

Relevance with the consumer ensures popularity. It doesn’t matter if the target audience is niche-specific or simply generic. Anyone with a keen eye is naturally drawn toward interesting content, which is a norm for buzzing campaigns.

Brands in this manner create a persona. This persona is the embodiment of what their customers aspire to be. Moreover, it trickles into their overall brand presence as well. In essence, it comes full circle to a holistic marketing approach. This is the main reason why everyone is happy drinking Coke, even though multiple studies continue to cite its harms.

Popularity, as a result of effective marketing, can turn a good brand into a great one. It is such a strong factor that even an underdog might look like a winner to the customer.

Take for example the Olympics 2012. Even though Adidas was the Title Sponsor for the major event, Nike came out as a winner. Although, Adidas had paid $150 Million to become the title sponsor, but still managed to get only 9k tweets associating Adidas with the Olympics. Nike, on the other hand, got 16k tweets! 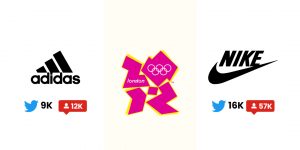 Where Adidas got 12k more followers, Nike got 57k. Most people in the U.S. even thought that Nike was the official sponsor. How did Nike Just Do It?

Well, Nike couldn’t officially advertise London of UK in their commercials, so they went for an ad that showed London from everywhere on the globe except for the UK.

And as they couldn’t hire athletes for commercials, so they hired teenagers wearing their products, creating inspiration instead. Next, they used a product placement strategy by making 400 athletes wear shoes contrasting the colors of the Olympic Logo.

The ad, linked below, broke the internet, enhancing Nike’s brand persona like never before.

But this was not the first time that Nike created waves with its campaign. Nike seems to have been the “Cool” brand for quite a while now. From its long-time association with Michael Jordan leading to Air Jordan Sneakers to continuing Kobe Bryant’s contract despite misconduct allegations, the brand has had quite a timeline.

Even as recently as 2018, Nike launched an advert after the debacle of former NFL Quarterback, Colin Kaepernick kneeling instead of standing for the National Anthem.

However, not every brand is Nike, and underdogs from the same niche have to try even harder to stay relevant. And these brands almost always integrate pop culture into their strategy.

Why is Pop Culture so Popular?

The idea behind pop culture is to create something universally recognized or at least known by the brand’s target audience. Done right, pop culture can often be the key to popularity.

Involvement in culture plays a vital role here, as it immensely influences purchase decisions. The figure below explains it a lot better.

In short, the more culturally relevant a brand, the higher sales it can generate. And in this realm pop culture is quite essential, as it’s just culture on a global level.

Why Pop Culture is Essential for a Brand?

One of the main reasons why pop culture is considered essential for a brand is because using it guarantees high content visibility and traffic for the brand. A social post that your audience can relate to on a personal level is more likely to be shared by them.

In other words, your followers start marketing your brand for you! Remember the long-awaited FRIENDS Reunion? Yes, the show that is considered one of the best sitcoms ever? Could we BE any More specific?

When HBO announced the reunion, many brands jumped on the bandwagon leading to some of the best social posts referencing the series. Check out our favorite one below.

Pop Culture provides an impeccable tone to a brand. Posts and even ad campaigns can often lead the customer to feel the touch of a brand. Ryan Reynolds is known for his quirks and has thus blatantly applied his personality to his brand, Aviation American Gin.

Although one can argue he has done this to save costs, the ads work because the direction is exactly what Reynolds is known for on social media. There is no secret that Ryan owns the brand, and was even able to place his Gin in the Deadpool 3 Teaser.

But ‘Aviation American Gin’ has been going bigger lately, becoming the official Gin sponsor for NFL and airing the ad starring Ryan Fitzpatrick.

Aviation wants people to look at it as something organic, and they achieve this by providing smooth visuals, fewer takes, and out-of-the-box quirks. The humor lies in mostly being spontaneous or flamboyant.

Pop Culture can enhance sales too

Some brands take it even a step further, using pop culture to generate more revenue too, while still reaping delicious engagements. Domino’s Paving for Pizza has been one such successful campaign.

The brand had the insight that fixing road cracks and potholes could lead to their pizzas being delivered in pristine condition. The campaign spread throughout the U.S. and the brand is now working on the second installment. But creating a buzzing pulse is not the only way for a brand to be relevant. Any grand gesture can go viral, but sometimes creative ideas are worth more than the budget.

Of course, being creative is a tactic often employed by the underdogs. You won’t normally see an unknown pizza joint go for Paving for Pizza, promising a grant of $5,000 for any community that needs fixed roads.

But then again, in most of our previous examples, creativity seemed to often trump budgets. Anyways, here are a few methods that might lead to virality with relevancy.

Pop culture is a rapid phenomenon, where all fads and trends have a place. One minute everyone is arguing how critics were wrong about Black Adam and suddenly people are flocking to watch Black Panther: Wakanda Forever!

But these waves don’t necessarily have to be about the current entertainment industry either. If simple storytelling can get you traffic, then imagine the impact when your campaign caters to mass perspectives.

The rise of electric vehicles over petroleum ones is a testament to that. People today are getting conscious of their carbon footprint, and looking for ways to minimize it.

Taking note of this General Motors recently decided to go all-electric. But this wasn’t all General Motors did. In fact, they created a star cast commercial announcing the shift, on one of the most expensive slots for ads in the advertising world.

The resulting advert mesmerized viewers at the Superbowl. And, as it resonated with the audience as a nostalgic callback, it also strengthened the brand’s image.

Or we can see how Pepsi did it with Messi. The renowned beverage brand created a video with the most well-known soccer stars getting owned by kids.

Brands that do not have the budget to officially collaborate, use subtlety instead. Instead of Messi or Ronaldinho being pictured in all their glory, these brands will go with a generic silhouette instead.

After all, if you’re not officially affiliated, using any intellectual property can be a copyright infringement. Do we want that?

See how Burger King did it for Stranger Things.

They got the hold of the brand referencing them, yet avoiding any claims. The results? That Burger King post got 14k more likes than their average post likes around the same time.

Memes allow you to incorporate jokes from pop culture all around social media, but they can also provide that needed sass to your brand.

Subtle trolling campaigns are also employed by brands for witty banter against the competition.

Burger King has often been found guilty of this. Their campaigns have ranged from taunting Mcdonald’s indirectly to even creating a specific campaign on their app just to give a burn to their famous competitor.

As every burn provided a free Whopper, the digital marketing campaign turned out to be a huge success. These types of campaigns have cemented Burger King’s popularity at “trolling” their competition, giving the brand a persona that can only be described as classy sassy.

So it is a fact that with knowledge about the industry, marketers can predict the next big thing and plan accordingly too.

Brands that have recognized the importance of relevance seemingly jump at every opportunity. But what most customers don’t notice and what most marketers do, is that these brands are always one step ahead.

Their posts and captions are ready at a moment’s notice. Whether it is a debacle at the Academy Awards or a proposal that goes viral, a post comes out within hours of the occurrence. This is often thanks to analyzing content consumption trends, and using opportunities to boost their digital marketing campaigns.

When Brands come together

This happened when a couple was filmed getting engaged at a KFC in South Africa. The video had gone viral and  KFC posted it on Twitter asking for leads to the couple. KFC decided to sponsor the wedding when they got to know that the couple was tight on budget.

Mzansi please help us find this beautiful couple, re batla ho ba blesser 😊 DM us any leads, there might be a Finger Lickin’ Good surprise in it for you too. Batho ba Vaal re thuseng! We love love 😍❤️ #KFCProposal pic.twitter.com/6bj89dtj4j

However, other than KFC, Coca-Cola and Audi decided to help in sponsoring the wedding too.

However, there is one short video platform that has changed digital marketing in recent years.

TikTok has taken the world by storm in terms of content creation for Digital Marketing. The buzzing atmosphere of the app has been welcoming to brands, influencers, and users alike. TikTok is quite different compared to other platforms. It continually presents short videos to users with a single swipe. The algorithm shows more of the content they engage with.

TikTok’s short-length videos require a short attention span and better entertainment. Moreover, videos that perform better on the algorithm also let content creators reach the top more easily. With literally thousands of influencers present on the app, brands can readily select collaborators for their campaigns and extend their reach within weeks.

Any collaboration post on this point can lead the brand to reap a high amount of engagement effectively penetrating the minds of its consumers.

Digital Marketing has always been much more agile compared to conventional marketing. However, in the last two decades, Digital Marketing has been slowly dominating industries to the point that more people are familiar with the brand via social media and Digital Video Commercials than Television Commercials. This is why it’s important that brands try their best to stay relevant to their audience by incorporating pop culture and ensuring engagements are at the top of their customers’ psyches.

What type of Link Building Services Should You Use?

Ethical Clickbaiting: How to Hook your Audience the right way